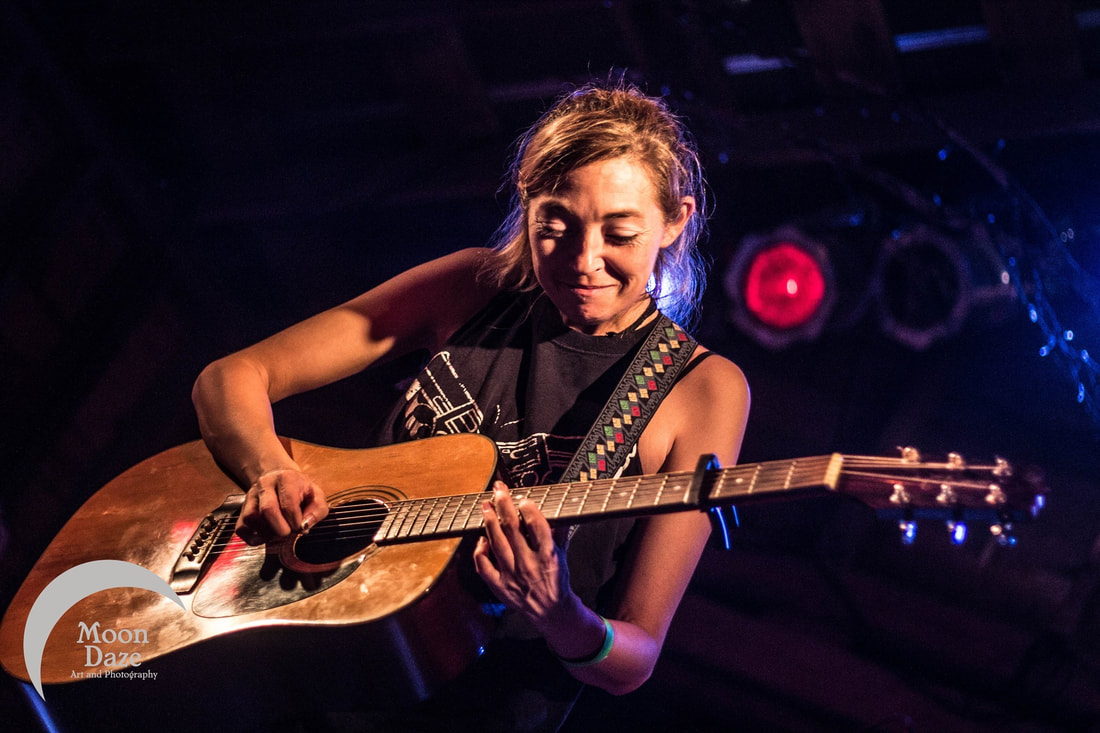 Katie Martin released a new album Hope this past Valentine’s Day and you should listen to it.  For anyone who has followed her, the record is all you could hope for (no pun intended): the melodies, the lyrics, the vocal delivery, the production are all a linear step forward from her previous releases, but the unique core of her initial ear-grabbing artistry, the voice that can convey a wide range of emotions, are all still there.

I first caught Katie at an open mic night at Darwin’s Burgers & Blues in Sandy Springs. Katie hosts her own open mic there every Saturday afternoon. I did not know who she was. After an hour of blues standards and basic three-chord blues patterns, she took the stage first with the backing band before performing on her own. Her songs were like nothing I had heard before. They had some blues influences to it, but they were not strictly blues. There was some folk in there, but they had more urgency and power than typical folk. Then there was a soulful delivery that could range from a wail to a whisper. Indeed, when I later asked her how she thought of her music, she said “Folk, soulful blues…..with some looping skills thrown in!” 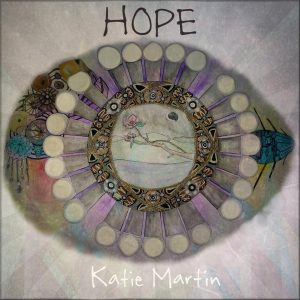 An artist as well as a musician, Katie created the album cover artwork.

This new batch of songs has a theme running through it of eventually finding some good out of difficulties. “The Call #2: Let The Storm Rage On“ kicks off the album with a spoken manifesto of her choosing truth, respect, hope, and faith in mankind. This declaration seems a perfect fit for these times of partisan fake news and tit-for-tat acrimony.  The theme of finding the positive shows up again in the title track. It has a lovely lilting melody intoning “When there’s no going back / and there is no room to stay / just keep moving on / and find a way.” On the song, Katie plays a Native American flute. “To learn to play it, I created a guitar loop in the flute’s key and played it over and over while I improvised on it.  It eventually evolved into the song ‘Hope’.” The album was produced by Grammy Award winner Larry Mitchell in his Chocolate Room Studios in Opelika, Alabama where he lives and from where Katie originates. Larry has served as producer, sideman, mentor, and sometimes stage mate after Larry and Katie collaborated on the ten songs that became her 2015 album Purpose.

Katie has been a player on the Atlanta music scene since moving here from Auburn in 2011. As she had in Auburn, she began regularly showing up at open mic nights across town where she could find them, making impressions and connections. Initially she performed the songs she wrote in Auburn, but as she rubbed shoulders with other blues singers and players, she began writing new songs incorporating elements of these influences. 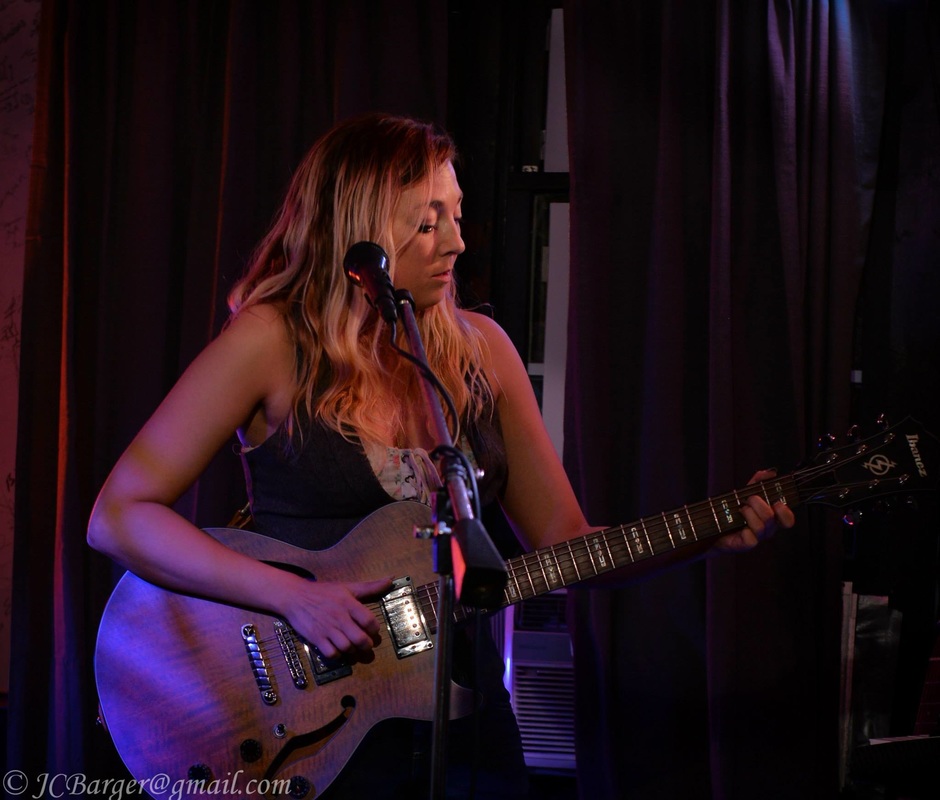 It is then she found her expressive vocal delivery, singing capable of conveying deep emotion, longing, and pathos that belies her cheerful demeanor. During this time she also honed her guitar style, developing a style of guitar fret tapping more commonly associated with shredding electric guitar. She combined that with using various parts of the guitar body as percussion. Katie says although it took some time to adapt that playing style and make it her own, it allows her to stand apart from other acts and even today when she plays in a band setting, gives her something interesting to contrast and complement electric guitar players.

Even in singing the blues, I have tried to evoke hopefulness…

She continues to absorb music influences in her time in Atlanta. “I still pick up guitar inspiration from my time at open mics and jams like Lola’s at Northside Tavern or in my playing as a duo with Larry or with Mike Martin [guitarist with whom she plays as Dos Martins]. Sometimes it is because I do not know any better that I can come up with something interesting or unconventional on guitar – I just keep it and decide how I can use it.  I do not play guitar simply for a means to be under my vocals; the actual guitar parts are just as important a feature of what I do.” Her collaborations around town have also influenced her crafting lyrics. Structure of songs and even lyrics can continue to morph and evolve over time after they have been performed a number of times. “I do not always just write something direct and confessional, but I will try to tell a story, which is not always common in popular music. Songs are often written in the first person so I will try to write in third person. I define who I need to be for each song. The narrator can be different. Working with others has deepened my approach to writing.” 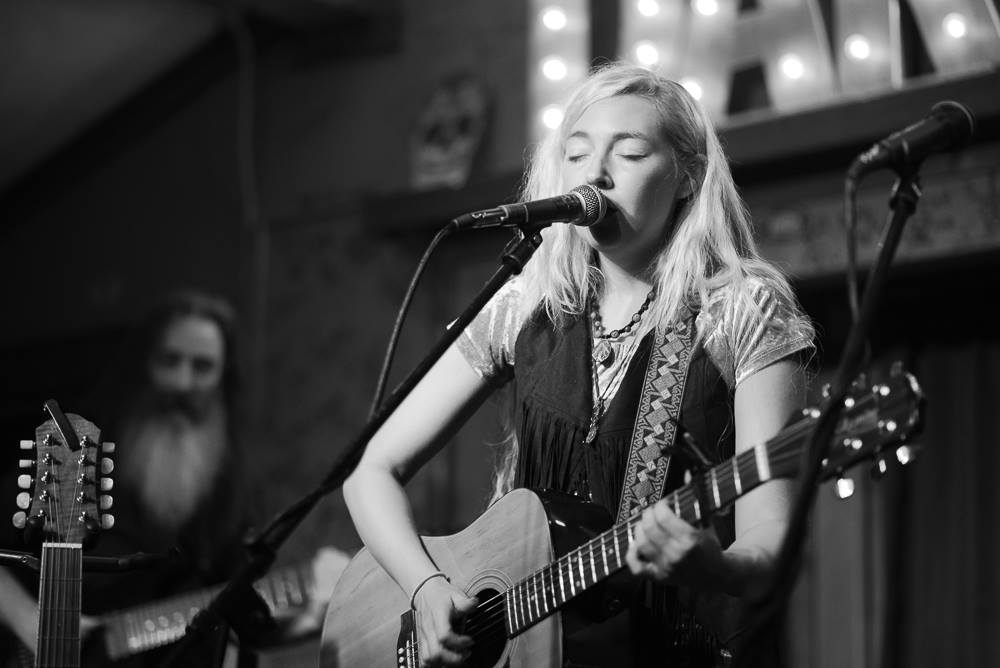 Reflecting on the inspiration for her lyrics, “They are really just taken from life and the things I have gone through.  Anything that I have played with feeling is because it is something I have gone through and come out of the other side. If I have gained any wisdom out of it, it is that perspective that people need to hear, to look at the pain in retrospect and what have I learned from it. Even in singing the blues, I have often tried to evoke hopefulness…”

Thus, reflecting on what she wants people to take away from the songs. “I hope people will feel moved in some way. I say that I try to be uplifting, but sometimes it can just be about putting a voice to something a person has felt. Sometimes even just hearing that a situation or an emotion exists for another can be enough. It can be an emotional release. The key can be taking something that is painful and making something beautiful out of it. Not everyone knows how to do this, but it is something I can try to do. I am a fan of Nina Simone, and she says that an artist’s duty is to reflect the times and therefore write for the greater good. It is a gift I can give the listener.” As her work clearly proves, Katie Martin is surely an artist. 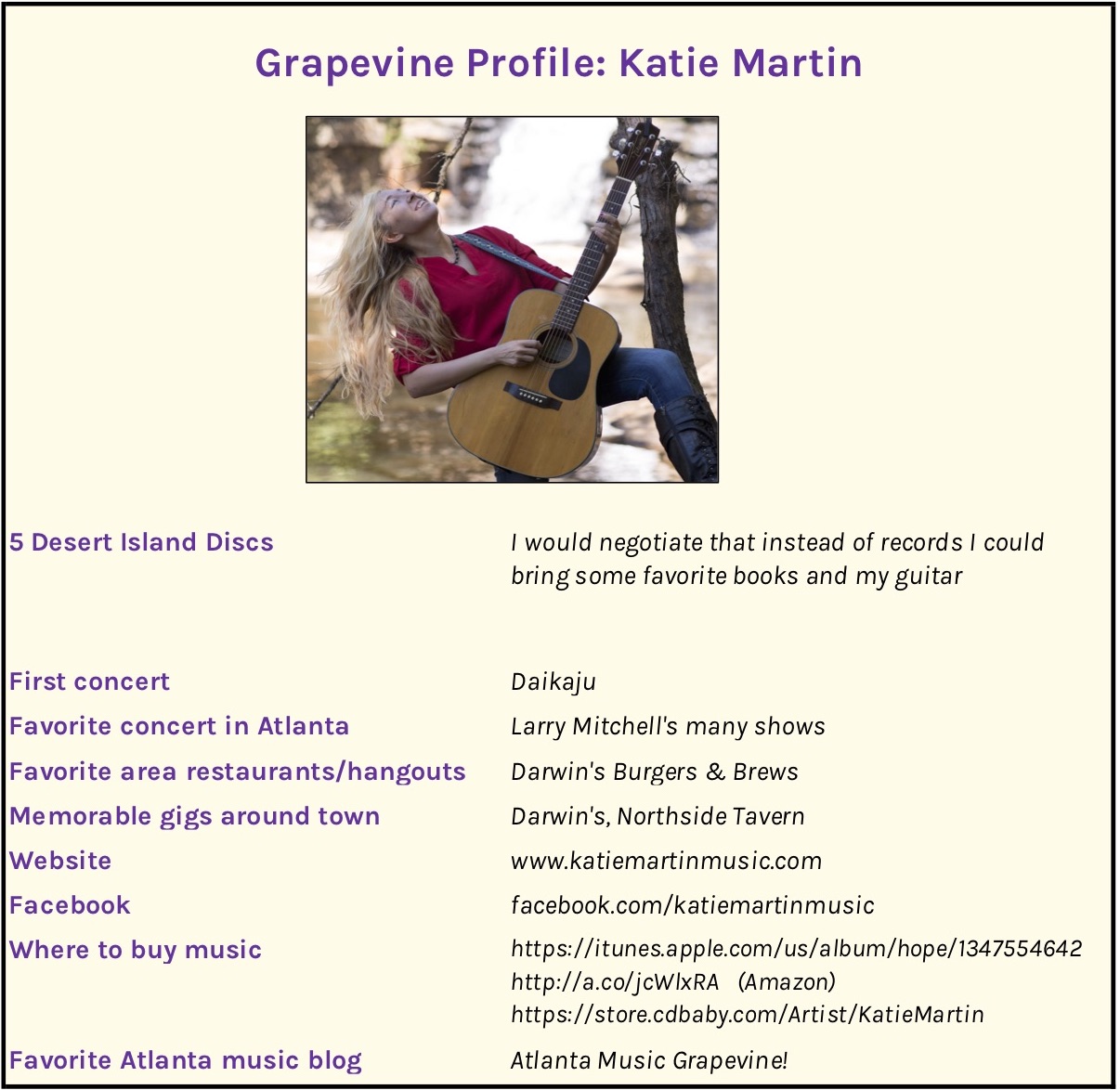