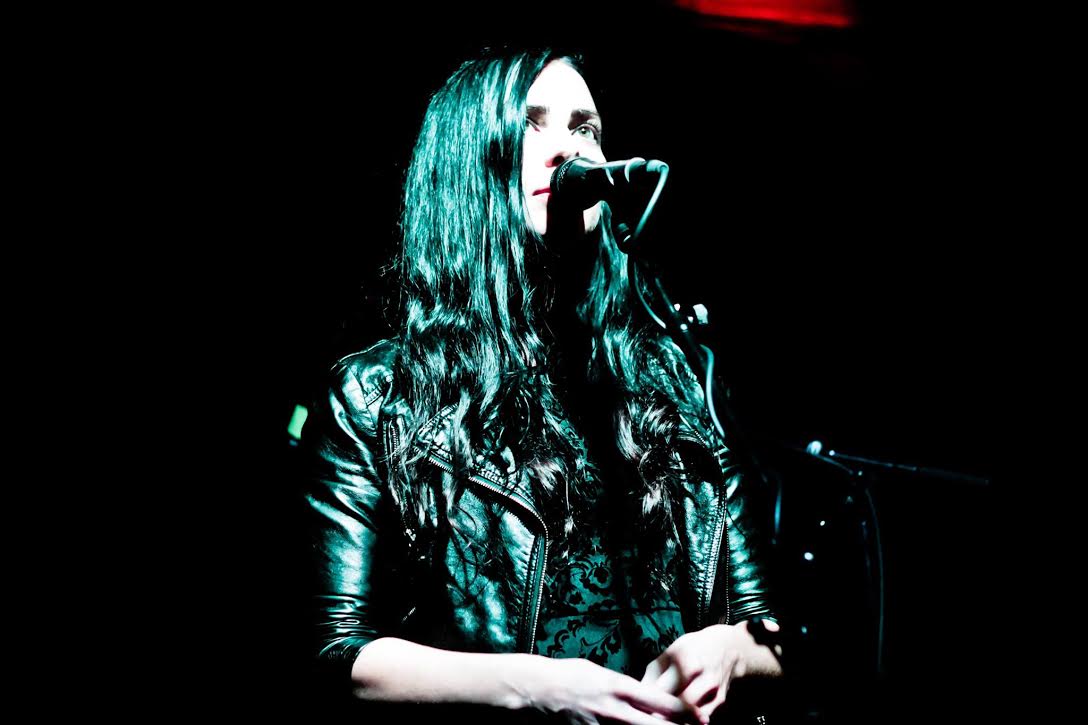 For as long as she can remember, Ashley Rivera wanted to be a singer. When she was in pre-school, she recalls her teacher, Miss Angela, asking what she wanted to be and she said “a singer” and Miss Angela and the kids clapped for her and she knew it was possible.

Ashley looks like a rock star – dark hair, slight figure, mesmerizing eyes. The first time I saw Ashley sing, she was the front for a cover band and was all of 23 years old; her soulful and yet rocking voice and stage presence went far beyond her years. She has spent a number of years singing with cover bands and doing studio work in Nashville and Atlanta, but her heart is for her original music.

Moving from town to town as a child in a military family, Ashley settled in Atlanta about 15 years ago and considers Atlanta home. Her earliest musical influences were country music and she recalls singing along with Patsy Cline, belting out the heartbreak tunes even though she had never experienced one. “I grew up listening to traditional country, it first inspired me to write music and I still love going back and listening to songs that in my opinion were just expertly crafted. Dolly, Loretta, Patsy, Jeannie C. Riley. As a kid I grew my hair out so long I would accidentally sit on it when I sat down, because I wanted to look like Crystal Gayle. I was just obsessed!”

But when Ashley heard Bobbie Gentry, she knew she had found her true inspiration. “I will never forget the first time I heard Bobbie Gentry’s “Ode to Billie Joe.” It was so different than anything else I’d heard. There’s an old saying that when you get chills, it’s because someone just walked over your grave. That’s what her voice sounded like to me, like someone just walked over my grave. I don’t know if that makes sense but that’s what it made me think of. I started listening to the rest of her material and found out that she wrote and produced her own stuff. It all had that haunting feeling to it. I always liked to write things that were lyrically on the darker side and it was amazing to hear a woman who did that unapologetically. So she was probably my biggest influence as a singer and songwriter.”

As she got older, Ashley was introduced to rock music and knew that was where her future lie. The first album she got was No Doubt’s Tragic Kingdom which she says her “cool aunt” bought her instead of the Spice Girls she wanted. While she did eventually get that Spice Girls album, her aunt opened up her consciousness to a different kind of rock. As she grew up, she uncovered a passion for rock music, including the likes of Led Zeppelin, Fleetwood Mac, and David Bowie.

Now she is fronting a new band, Sister Moon. She still does the occasional cover band gig, but her heart and soul lie with the original music that Sister Moon is creating. Sister Moon, started in 2017, has a unique sound that is a combination of rock, blues and haunting melodies. The band is made up of guitarist/producer David Rowe, drummer Gary Stone, bass player Lee Banks, with Ashley on vocals. They had all played together separately in different combinations over the years, and decided in 2017 to pull together and form Sister Moon. Ashley describes the music as Southern Gothic with a lyrical focus on magic and dark themes.

Dark rainy nights put me in the mood for writing...

When Ashley met her co-band members, she felt “a really great vibe with them and wanted to explore more rock and roll.” They began working on writing original music together. Ashley and David write many of their songs together, often times based off of ideas that Ashley brings and David embellishes. When they started on their new album, the “writing happened really fast, it just flowed naturally” says Ashley. While Ashley wrote many of the lyrics, “It is David that often takes the idea and does the crazy amazing music stuff.” 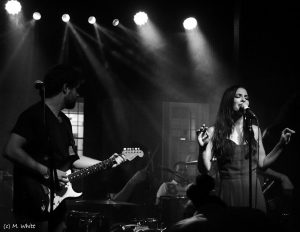 As Ashley talks about her band members, it is obvious she has a deep respect for each of them and the unique skills that they bring to the band. “My bandmates are incredible musicians, and I’m blown away every time I’m on stage with them. But as far as how or why we were drawn together, I’d say it’s because we are all writers first. David, Gary and Lee all write and record their own projects that I’m genuinely a fan of. So every time I bring a song to the table I’m presenting it to three people I admire as writers themselves. It makes me want to get better. Add that to the fact that they’re all hilarious and put up with my craziness and it’s a good combo.”Ashley says her song writing is often inspired by film, but mostly those that are on the darker side, think David Lynch. “Dark rainy nights put me in the mood for writing, I am not a sunny day writer by any means and when I am not writing I get antsy.” 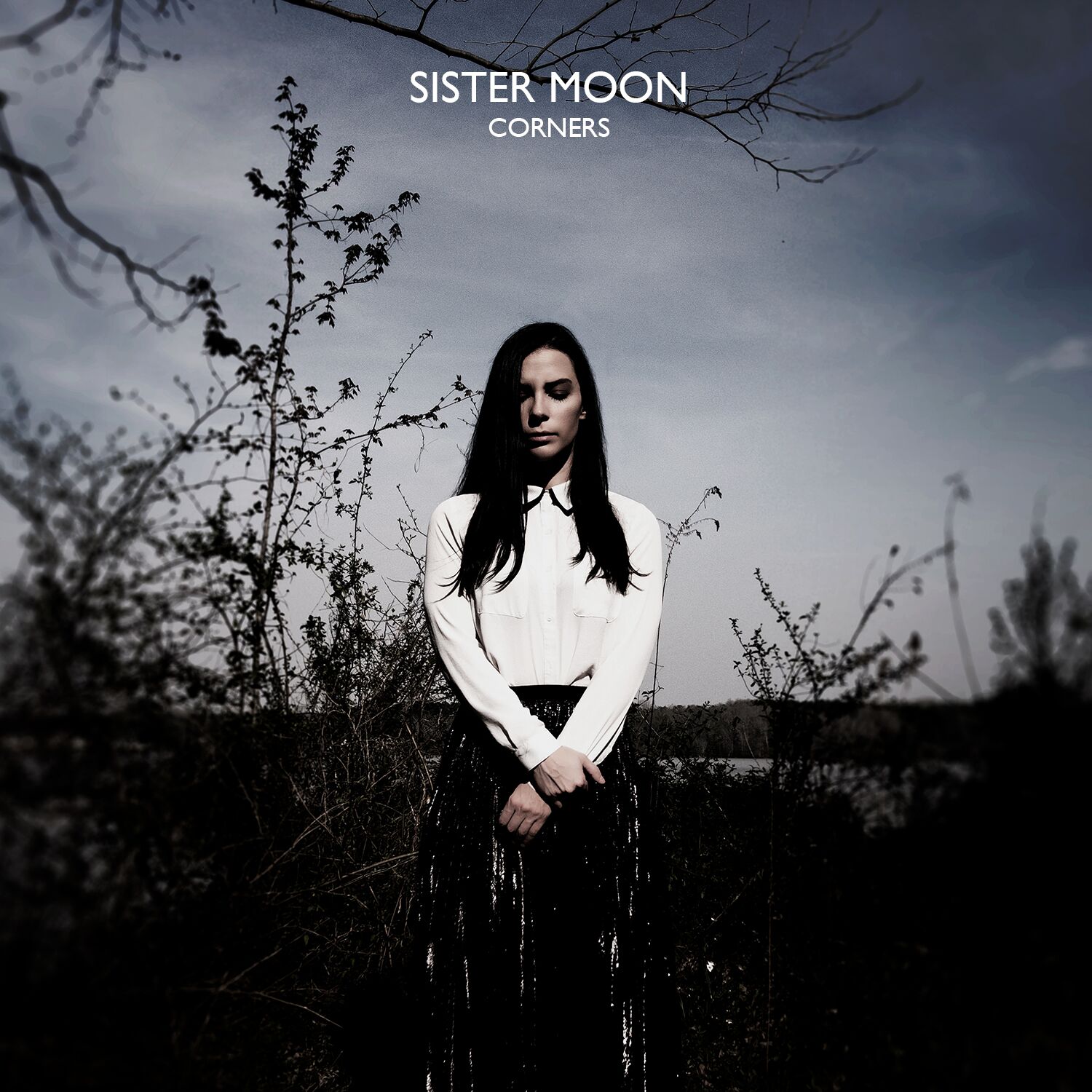 Sister Moon recently released a new single, “Corners”, which is part of an album in the final stages of production. “Corners” showcases the bands ability to spin a story that is filled with dark and emotional imagery and Ashley’s voice carries the listener through the darkness and reflects the pain. Ashley says “I started on “Corners” at our studio house in Madison. I was in a low mood during a difficult time in life and sat down to see if I could exorcise that somehow. Then the first verse and chorus came to me. I kept writing the lyrics over some basic chords that day and then brought what I had to David. He has a way of finding out exactly where I want to go musically. We finished it together over a couple of sessions.”

Listening to the song, one can hear it tell the story of lost love, beginning with a dark, hurtful perspective. The corners are where the pain hides.

The band expects to release additional singles over the next few months and potentially an EP before releasing the song collection as a full album.

In addition to their work together with Sister Moon, Ashley and drummer Gary Stone co-own a studio in Madison, GA which they began building out about three years ago. The remote setting is perfect for the studio. “It seems like you are driving into the middle of nowhere and when you go there it is literally on the edge of Lake Oconee. It’s a great set up, but it’s off by itself, which is great for writing and recording. You can be as loud as you want, you’re at the lake, you have your coffee, you start writing and it’s great.” They have a couple of projects coming out the studio over the rest of 2018 that they are excited about.

Ashley recently moved to Athens; however, you will often find her in Atlanta area hang outs. She hosts a monthly open mic night at Atmosphere’s in Loganville and she and Gary play together acoustically around town. She likes to play at Smith’s Olde Bar, where she says it is obvious that they are trying to do the music right, from the sound systems to the lighting it is built with the music in mind. She also works with a few cover bands and does some studio work when she can. 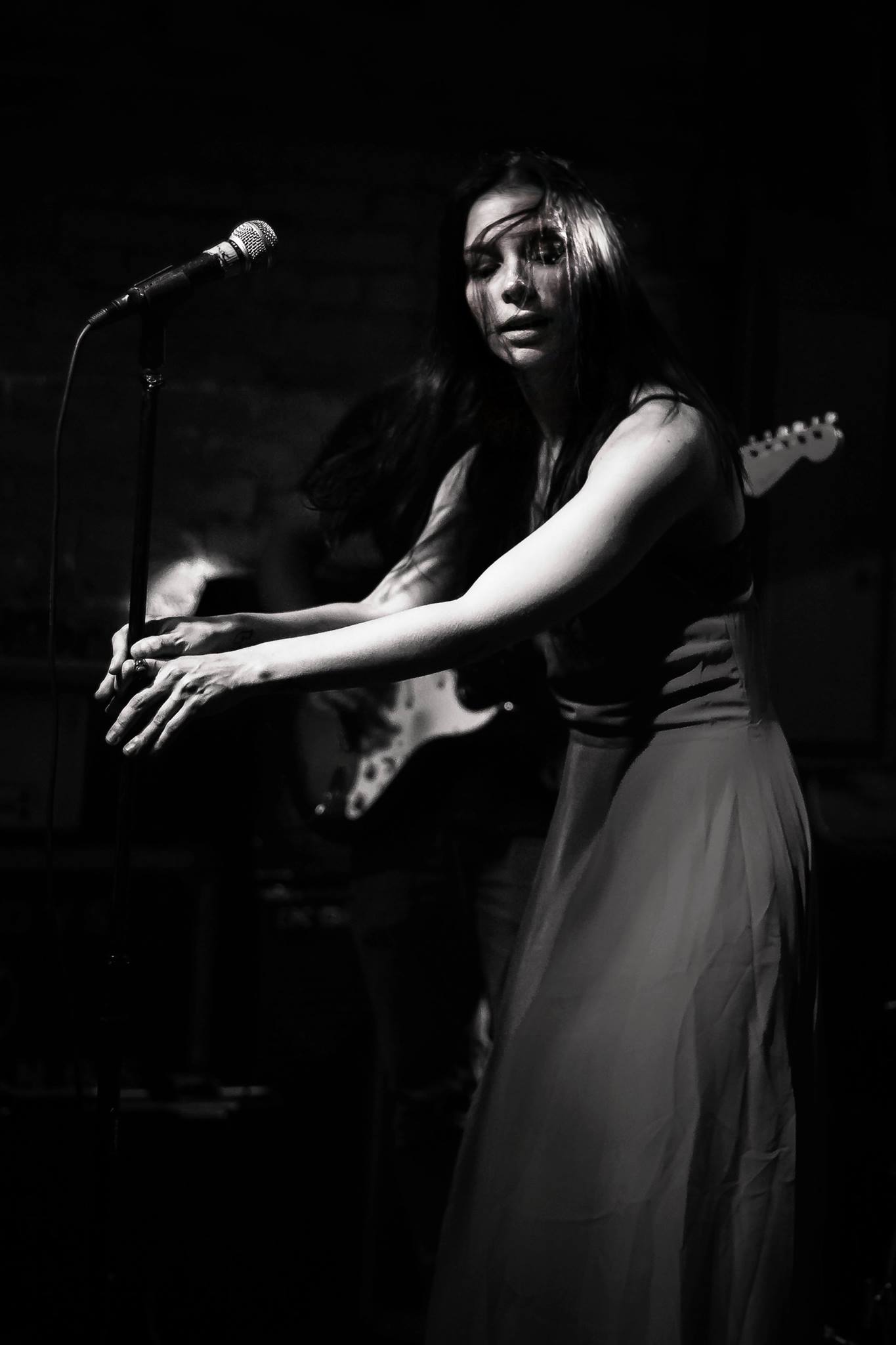 With her wide vocal range, enchanting voice and a knack for soulful storytelling that is now gelling with new bandmates, Ashley Rivera has lived up to her preschool aspirations of being a singer and so much more.

Sister Moon’s next performance is at the Velvet Underground at the Hard Rock Café on June 22. They will be sharing the bill with Last Chance Riders and Tyler Lee Frush. Tickets to the show available here.

You can find Sister Moon on all of the streaming music sites and buy their single on iTunes. 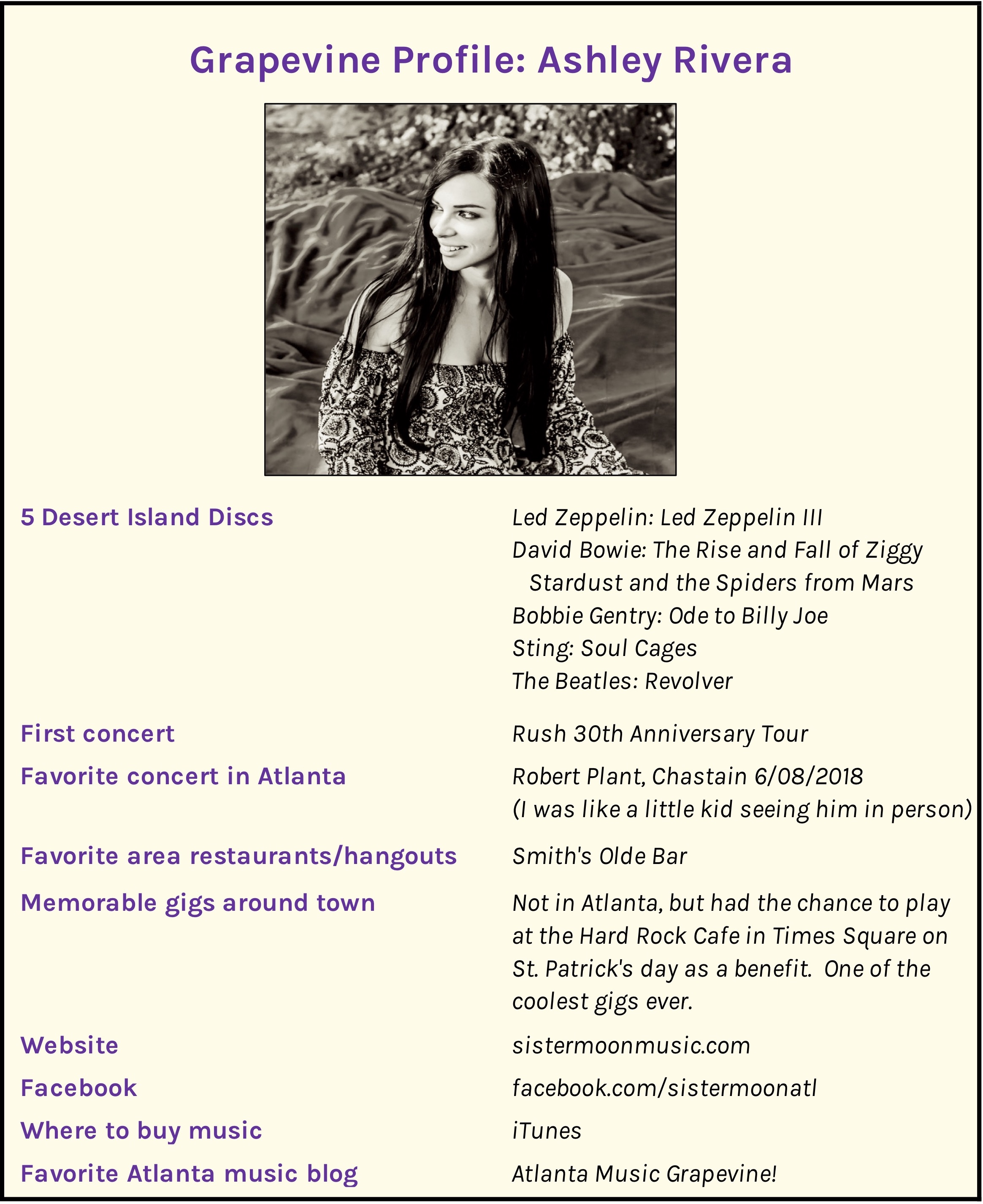