When you meet Lindsay Wine, you just feel it: her energy, her passion and her love of what she does – and what she does is pretty special. She, along with her boyfriend, Jonathan Akin, own one of the most storied music venues in Atlanta, Darwin’s Burgers and Blues in Sandy Springs.

You may have heard of Darwin’s and know a bit about its ups and downs, but Lindsay and Akin are writing a new chapter in Darwin’s story.

Darwin’s history goes back to the 1995 when Kay Rowedder, a spirited and independent woman and a pioneering female commercial pilot, bought a house that was at one time a biker bar on Roswell Road in Marietta and turned it into a blues club. Rowedder brought in top national blues acts and the club became known in the music world as “the” venue to visit when in Atlanta. Lindsay speaks with admiration of Miss Kay, “She was so fabulous and such a visionary. She made it a listening room, it was all about the music. She put Darwin’s on the map in a big way, locally and nationally. I still have musicians approach me saying ‘I have heard of the world-famous Darwin’s, I really want to play there.’ I attribute all of that to Miss Kay, she really set the precedent for this place.” 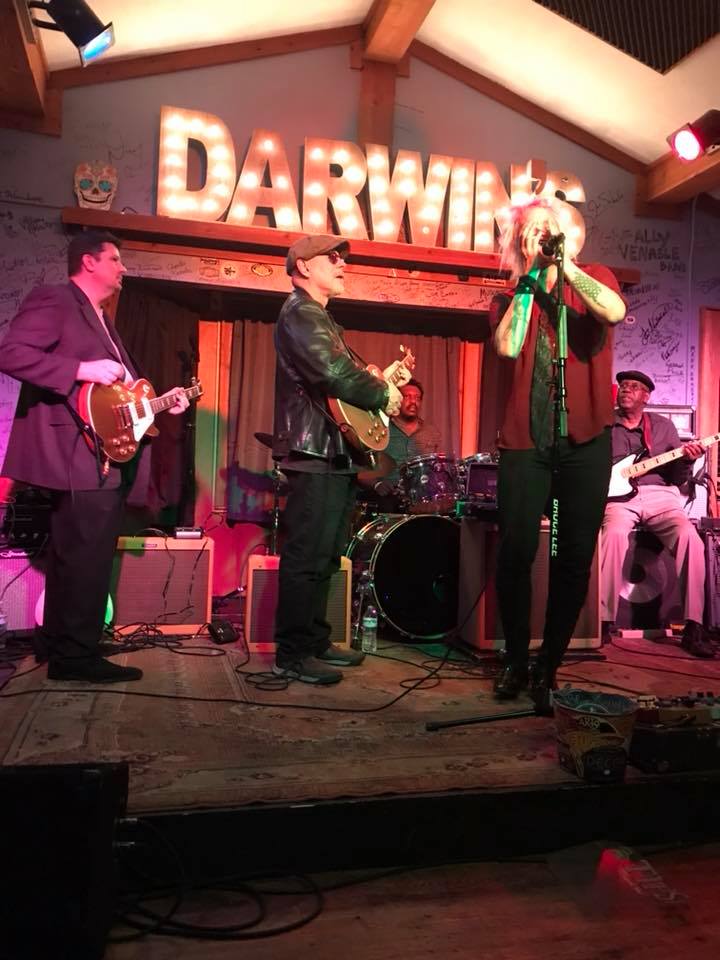 Jason Ricci blows harmonica with Kyle Smith and Lee Griffin on guitar, Terrance Prather on drums, and Melvin Zachery at the benefit for the Sean Costello Memorial Fund for Bipolar Research April 14, 2018

After a heart attack, Rowedder sold Darwin’s. The new owners let the place fall into disrepair and the building was condemned in 2010. But in 2011, Darwin’s was fortunate that Lindsay and Akin walked into the joint and fell in love with it.

We are first and foremost a music venue. Our entertainment is the music. It has to be the main focus…we have to have the right environment and set it up in a way that we want it to be perceived.

Lindsay and Akin were planning to start a food truck after leaving corporate jobs. “We did the corporate thing and we were going to do a food truck but were convinced by a friend of a friend to look at some established restaurants.” After looking across the Atlanta area, they walked into Darwin’s.

“It was in terrible shape. It had a big condemned sticker on the door, the floor was falling in, just terrible. For some god-awful reason we loved it when we walked in, absolutely loved it. I think the building reached out and hugged us. We didn’t know anything about blues music or running a bar, the scene, nothing. We moved in total faith.”

They invested in bringing the building back into repair and reopened in September 2011. They kicked off the new Darwin’s on Blues Jam night. That night made their rent for the month and they have been going strong ever since.

Lindsay says “We have tried to keep Miss Kay’s vision alive and bring it back to the hard-core blues establishment that it was. We get national acts, we do a lot of local. We give a lot of people a chance to build their names. We like to give folks the ability to break into this market. It can be a big risk, and not many clubs are willing to do that and I understand why. But we think part of our mission is giving local artists a chance to be heard.” 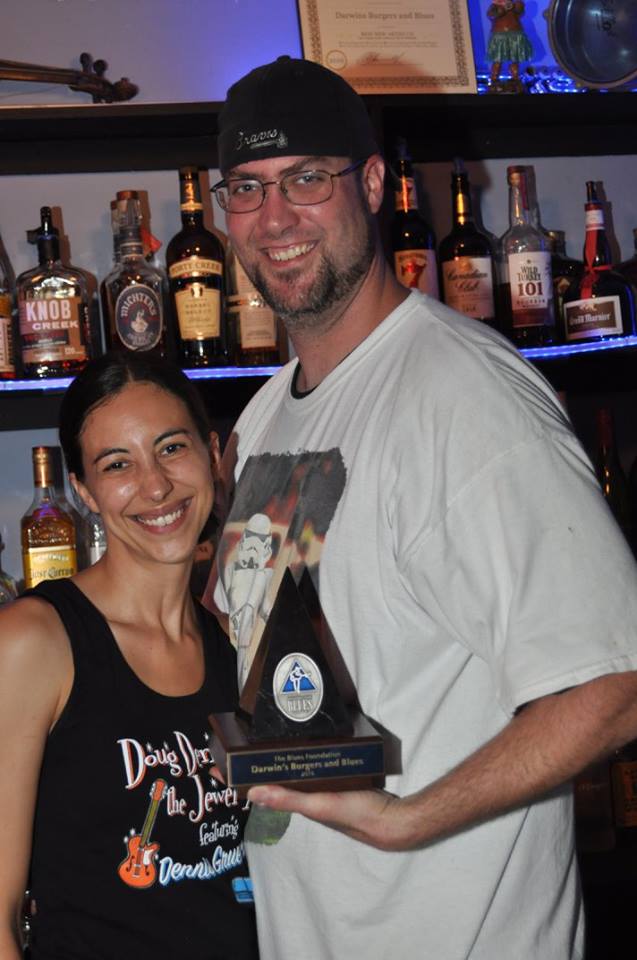 Lindsay and Akin hold their 2016 Keeping The Blues Alive award from the Blues Foundation.

In 2016, the Blues Foundation recognized Darwin’s with their “Keeping The Blues Alive” Award which is given to organizations that are investing in promoting the blues. The award was given to them because of what they did to bring Darwin’s back and their continuing to promote the blues in Atlanta. They were invited to Memphis where they received the award which sits in their lobby today. Lindsay says, “We are so super proud of that.”

In early 2017, Lindsay and Akin decided that they needed to move the venue to a new location. The situation at the original building was not great as the building needed constant repair and it became untenable to maintain the business there. So, after searching for the right space and location, they landed in their current location at 234 Hilderbrand Drive in Sandy Springs. The space was really ready-made for them with a kitchen, bar and stage. They brought many of the artifacts from the original location and have created an inviting and interesting music venue. There is more space; it seats about 100. “Someone called it Darwin’s double wide, and that totally stuck.” “The fact that we were able to find another little gray house, stand alone, already with a stage, with wood floors and the set up that we liked, it was just serendipitous…after six months of looking everywhere, this place was the perfect fit, so we just saddled up here.”

Lindsay and Akin found the perfect fit for the latest incarnation of Darwin’s in Sandy Springs.

With the move there has been a change in the people coming to Darwin’s. Originally, they thought that their existing customer base would continue coming, being only 10 miles from the original location, but in fact, that didn’t happen as much as they expected. But after a tough first year, they have re-established themselves in the new space, attracting new customers and new acts. “It takes about a year for people to realize you’re here, what you offer and that you are going to stick around, especially in this area where restaurants come and go, people want to make sure you’re going to be here before they commit. But we think we have a unique place in Sandy Springs, we are an all-ages venue, smoke-free with a great menu.”

Despite the challenges of running a business, Lindsay and Akin have maintained their relationship and sense of humor. Lindsay grew up in Myrtle Beach, South Carolina and went to school at Clemson. She arrived in Atlanta in 2007. Akin hails from Macon and moved to Atlanta in the late 90’s to attend Georgia Tech. They have been together for nineyears and have found that the secret to their success is that “There has to be a hard line between business and relationships and luckily we set that pretty early on. Akin manages the back of the house, I manage the front. We know our roles and let each other do their job.”

While Darwin’s remains true to their core of blues music, they are beginning to branch out just a little bit to create a broader appeal. Lindsay says “It’s really important to us to stay true to the heritage of the blues that we have, but we also know that we need to appeal to a broader base of customers and so are looking at acts that are close proximity to blues that may draw in new customers.” 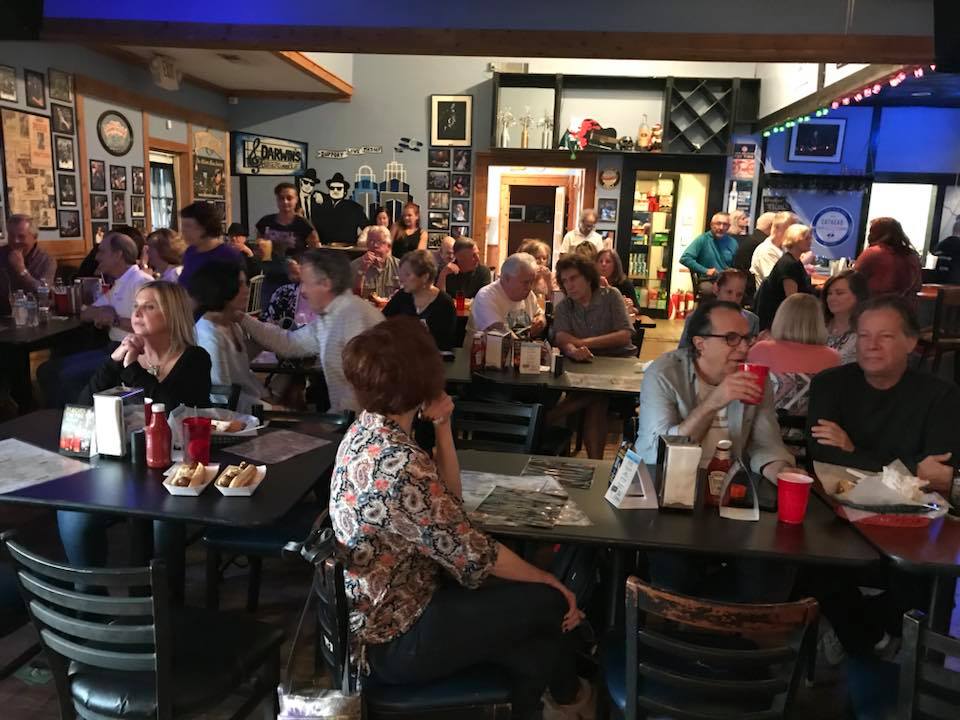 In addition to serving up some good blues, Darwin’s serves up tasty burgers and good bar food to go with the music.

That means that there is almost always some form of live music going on at Darwin’s. On the weekends Lindsay books local bands and national touring acts from around the country. Wednesday nights and Saturday afternoons, they host an open mic where anyone can come play on the Darwin’s stage. On Thursdays, up and coming talent Cody Matlock performs and many Sundays you can catch Gospel Lunch with Mandi Strachota. Katie Martin hosts her open mic every Saturday afternoon (see her AMGV Artist Spotlight). Other Sunday shows include local youth bands like No Solution and puppet/magic duo Bean & Bear. Darwin’s also hosts music recitals by local music schools/programs in the area.

We think part of our mission is giving local artists a chance to be heard. 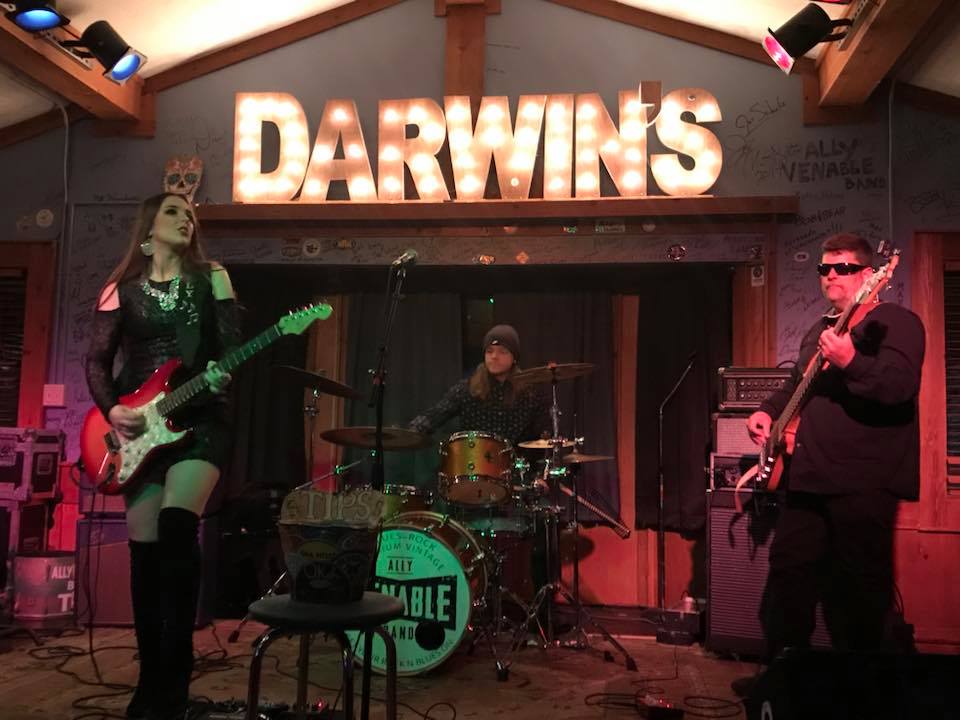 Darwin’s hosts many national acts like The Ally Venable Band, with Ally on guitar, Bobby Wallace on bass and Elijah Owings on drums

To increase the recognition of Darwin’s across the Atlanta region, they have been working with local organizations such as the Heritage Sandy Springs group, The Atlanta Blues Society and others. As Sandy Springs continues to develop and more people move into the area, “we hope to be the neighborhood watering hole. But also be known for our awesome music.”

Lindsay says “Even though I am totally tied to this place, I love the freedom it gives me. I don’t have to wake up early, I don’t have to live someone else’s life, I get to do what makes me happy.”

So far, Darwin’s has proven that the strongest survive and the next chapter in the Darwin’s history will surely will show that it also thrives.