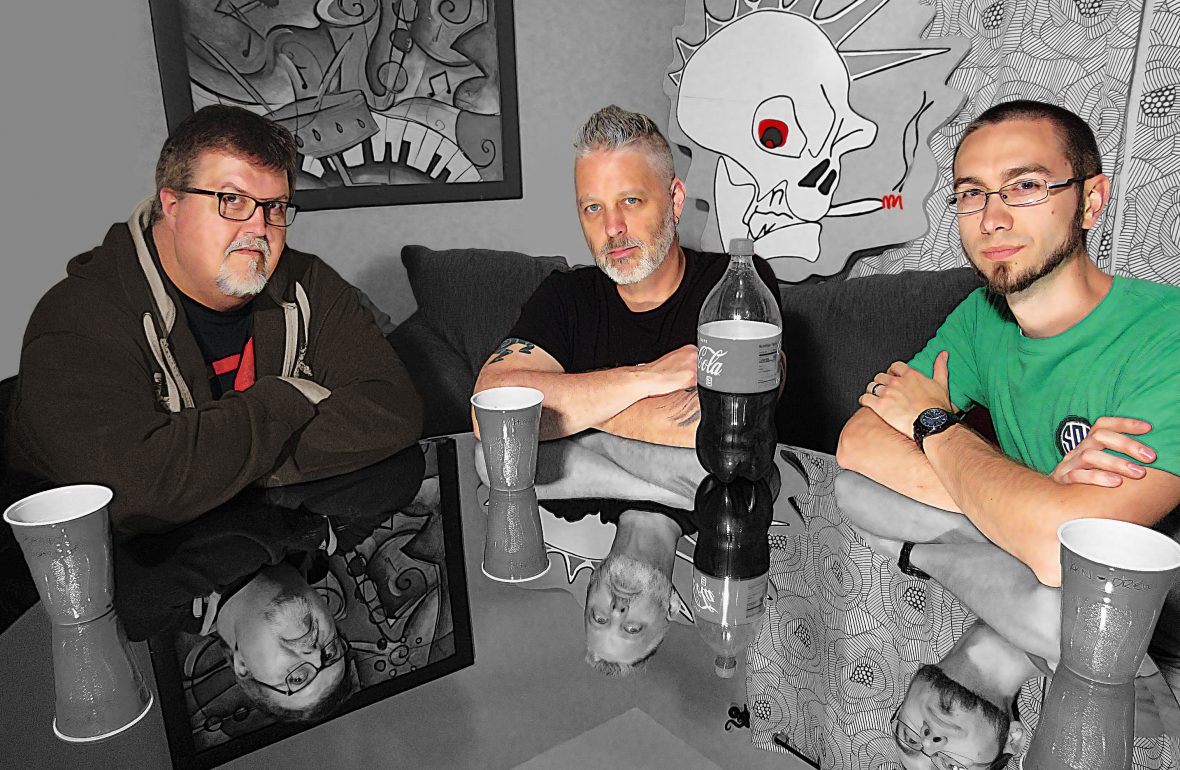 Big Murder sounds a little frightening. But if you want to know “Who done it?” you have to look no further than Marcus David, the front man and guitarist for the band, and you’ll find a mastermind of weaving together musical influences to create rocking original tunes.

After getting his first guitar in college, Marcus moved to Atlanta with just his clothes and a couple of guitars with the intention of pursuing music and touring full time. But life and family unexpectedly became priorities and the touring musician idea was put on hold for a few years. Marcus even sold off most of his gear.

But music still had hold of him. When timing later allowed, Marcus started acquiring simple studio equipment and other gear. Using music websites he found like-minded players. Over the course of a couple of years, Marcus estimates he and others co-wrote over 200 songs. The music influences reflected the great variety of rock music: Led Zeppelin, Rush, Ozzy, with occasional metal influences among a much longer list. Marcus states “We had one song that sounded like a blend of Pink Floyd and Incubus, two of the bands that have a direct influence on my style. That is how we named my production company Pink Bus.”

Marcus was the guitarist in the bands LiarFace and later the Black Stone Kings. Both bands regularly played their original songs at the major clubs across Atlanta and cities in North Georgia. While he was a primary songwriter, he was not lead vocalist. When the Kings dissolved, his desire to bring his songs to life himself and play and sing them as he heard them led Marcus to find new members for a band he would front and thus Big Murder was born. A somewhat unusual name, Marcus says, “How many bands do you encounter with a name like “The Somethings” where something could be any plural noun? These can be quickly forgotten. There is no sinister meaning behind our name. We are all about fun and entertaining, but it is a name people remember well. Think of a harmless band name like The Killers. We would make an interesting sounding bill together!”

There have been a couple of incarnations of Big Murder with a few musicians coming and going, but the band seems to be settled into a structure and sound that works.  Through music websites Marcus found bassist Randy Hall and drummer Evan Buckler. “Evan is an incredible drummer. Randy – he is like a brother to me. He is brilliant and a true musical artist. There is a real chemistry among the three of us and a desire to be collaborators.” Stylistically the three still stayed in a hard-rock pocket, but the two new guys brought in additional music influences – from prog to pop punk – that drove new songs which eventually became their first record Shifting Ground, then their follow up, Slow Moving Planet. The records are an interesting mix of sounds whose precedent influencers are difficult to exactly pinpoint. Songs like “Gray Sky” or “If You Leave” recall bands who began in the 90s like Incubus or even Alice In Chains. There is also an experimental side that seems equally touched by Radiohead on songs like “Churches.” “Want This Now” occasionally reaches for Mastodon-like melodic metal flourishes. Geddy Lee might have snuck into the basement for “Barking At The Gods.”

Oddly for a guitar player, I take most of my cues from drums. Drum beats inspire me to create matching guitar parts.

This year, Evan decided he needed to leave the band to spend more time with his family just as the band was wrapping up the second album. Fortunately, they didn’t have to look far to find a new drummer. Andrew Bennett had joined the band as a second guitarist on stage; however, Andrew’s primary instrument is drums and he gladly offered to take the helm behind the kit. Most of the recording work of the second album had been completed when Andrew joined. “Evan is playing on all the record, but we did get Andrew to read a spoken section of a song, so he is on there!” 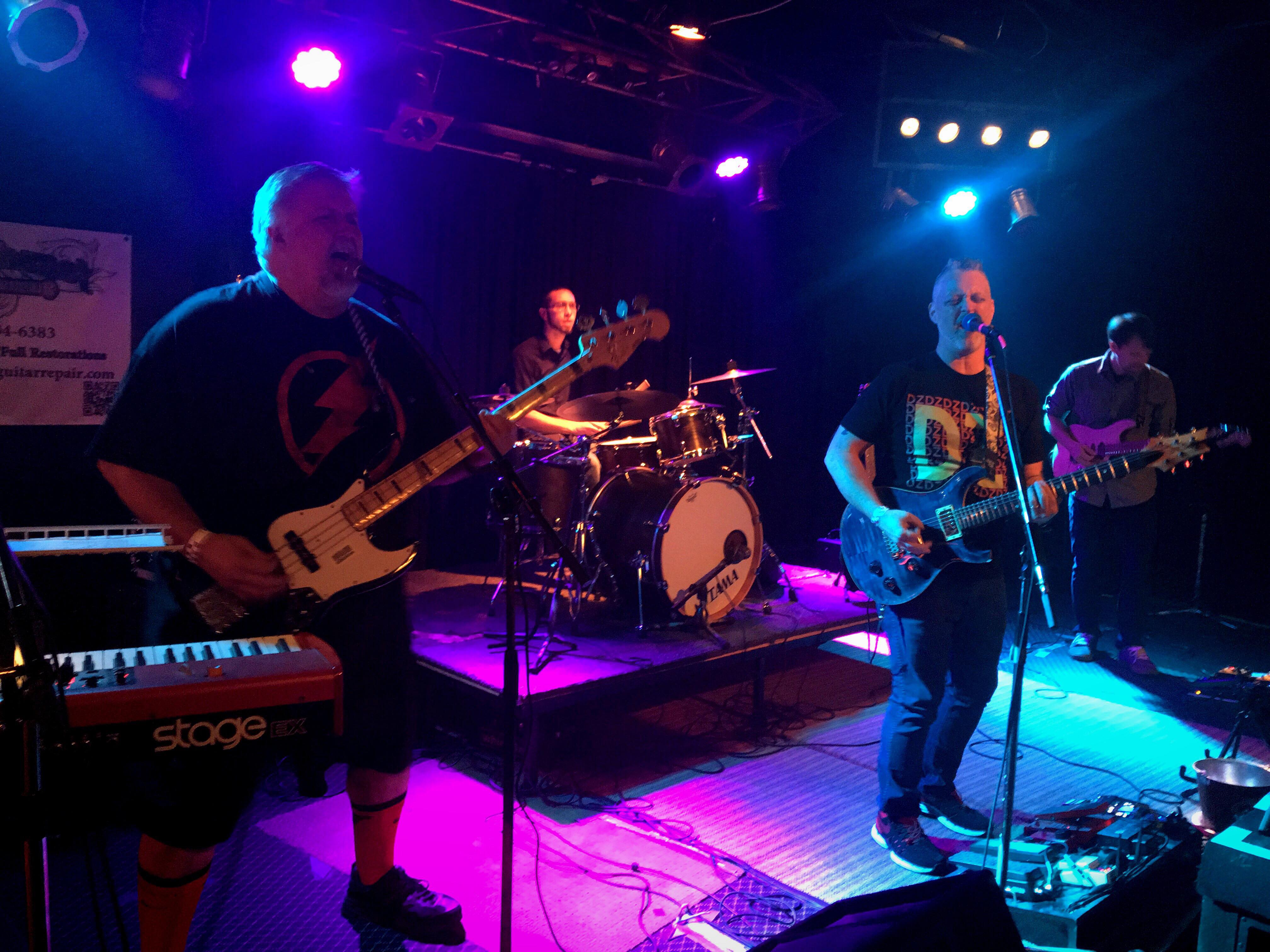 Big Murder on stage at Sweetwater Bar and Grill, July 7, 2018

Initially, there was a little learning curve as Andrew absorbed the new material, but they knew it was destiny when they discovered both Randy and Andrew shared as their favorite artist, one that perhaps does not have a lot of general awareness, Porcupine Tree. In addition to that bond, both rhythm section members have music degrees. “They can get together and discuss theory, modes and scales and odd time signatures,” says Marcus. “I am a more straight-ahead player who likes power and energy in music but our intersection makes for good music.”

Already the three are beginning to work on a third album. Marcus explains, “There is no formula for how we create songs. It could be lyrics first and singing a rough melody line for a verse leads Randy to suggest a complementary chorus.” The sound of a song can evoke certain images. I already had lyrics for what would become “Barking At TheGods” based on the habit of my pitbull Mr. Bloolifting his head and barking whenever there was a thunderstorm. We were working on some music parts that just seemed powerful like a storm and it matched the lyrical imagery. Often times there are riffs that come to one of us and we keep playing them through to see what works. Ninety percent of them might be garbage but, it is the other ten percent that are keepers that make it worth it.”

“We already have 10 to 12 songs in that riff stage. We also know this is going to be a very different record because Andrew is a different drummer. Oddly for a guitar player, I take most of my cues from drums. Drum beats inspire me to create matching guitar parts. New drumming is opening up a lot of new ideas for us.”

The next album will be recorded again at Pink Bus Studios and mastered in Ontario by the same engineer that polished Slow Moving Planet. “The recording process should be easier and faster now. We have learned so much about dialing in the sound we want as a result of the previous album.”

In the meantime, the members of Big Murder have played a handful of shows as a new unit, but are planning some additional shows before they begin recording later in the fall. Keep on the lookout for shows via our pages as well as the band’s website. It would be a crime if you were to miss them.