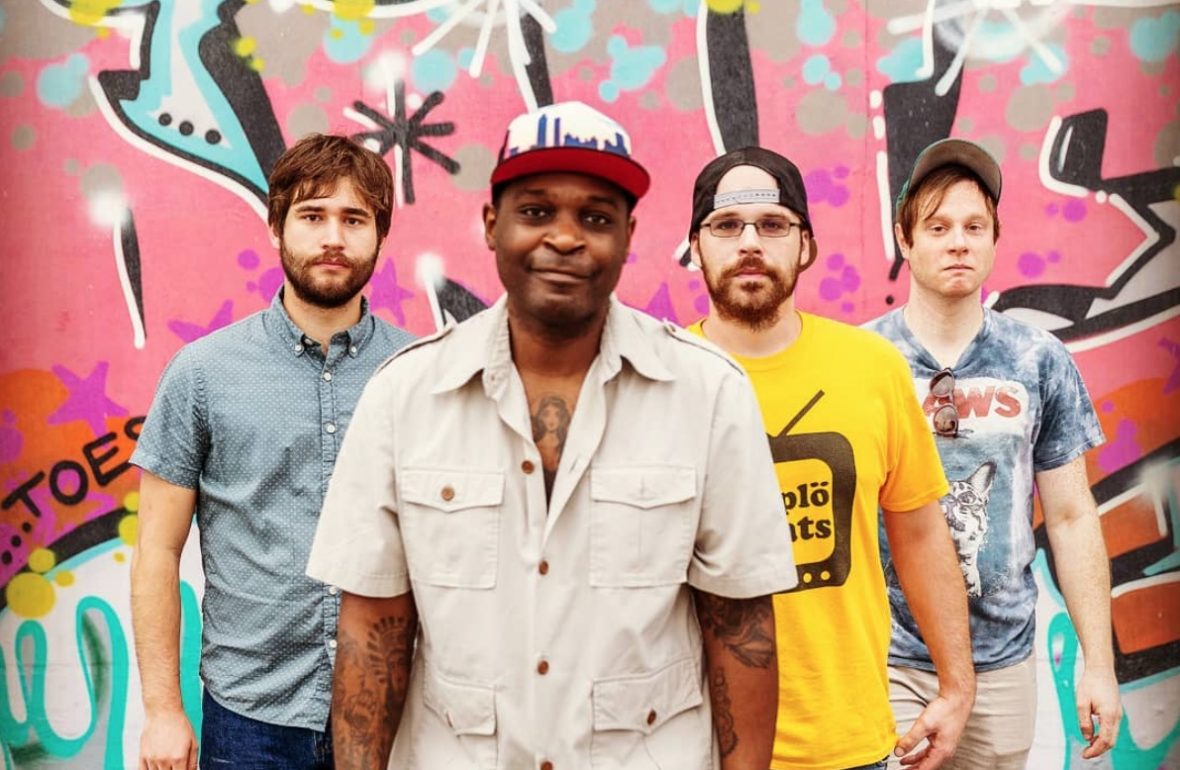 Sometimes it is important to remember that rock and roll ultimately is about having fun. Musicians with day jobs or even those consumed with tasks to manage their social media and other career steps know that the daytime has enough stressors of its own. Sometimes you want to just listen and have fun. Sometimes you just want to play.

That is the sentiment behind Play Center Band, which bassist Kevin Lee first contemplated putting together in fall of 2017. A native of the Atlanta area, he started in cover bands playing parties and various gigs before moving on to playing in original music bands such as The Basics, Blackheart Revival, and Infinite Ways. At the time, Kevin wrote many of the songs, and was content to stay in the back of the stage playing bass. However, he eventually grew antsy hearing the songs he had written being performed differently than how he imaged them when he wrote them.

Kevin’s friend, Mars Rodriguez, who is a singer, was visiting from Nicaragua and joined in some band sessions recording new material. “After some recording takes that melted down in a bit of strife and attitude, she confided to me ‘Why don’t you just go and do this on your own?’ and I thought ‘Right. If the final product is not the way I want it, is because of me, not anyone else.’ I wanted to take on that challenge.”

Kevin had a vision for how he wanted to do things differently this time. He wanted to approach song writing in a collaborative, encompassing way. He wanted a group that developed music organically featuring all of his influences. Kevin shares, “Whatever that ended up being was ok and if people get it they get it, if they don’t they don’t.” Most importantly, he wanted there to be a focus on the sheer fun of playing music.

As Kevin began the process of building the band, he decided to start with a name that represented what he was looking for. One night, while at the gym, he saw the sign for the kids’ recreation area that read “Play Center.” Kevin says, “That is analogous to what I wanted. I wanted a childlike wonder and joy in creating music. I wanted it to be fun, and to be something we cannot wait to do. Our practice area would be where we go to ‘play,’ only it is just that our toys are guitars, drums, and studio gear rather than balls, toy trains, or action figures.”

Kevin scoured Internet forums looking for musicians to join his band. “In December 2017, Nick Moore answered one of my posts offering that he played drums. He came over and we jammed together with me on bass. That felt good. Almost immediately after, Harry Jingles responded about playing guitar. He lived close by and so the three of us jammed. It seemed like a good fit. I already had written several dozen new songs that we were playing. However, they were written with two distinct guitar parts in mind. We played out a few times as a three piece, as we were holding out for the right guitar player.” Enter Andy Kendall, who was a perfect match in music and camaraderie. With all four members in place, Play Center was born. 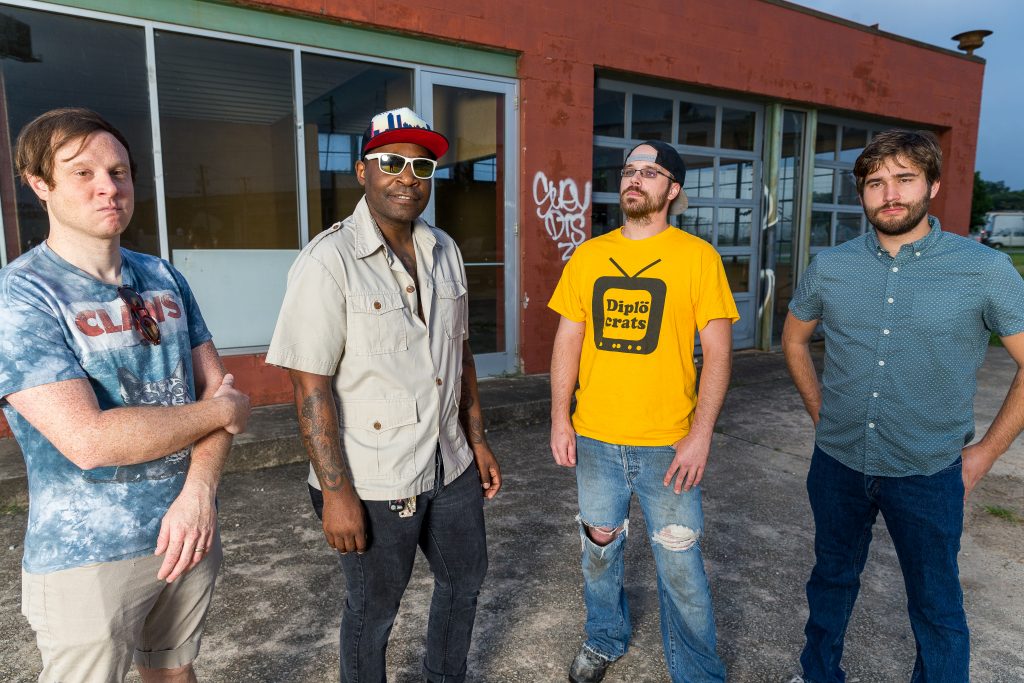 So, what does this fun, playful music sound like?

“All of us have very diverse musical backgrounds and interests. But we also have several bands that we all love and that informs a lot of what we do. These might include the 90s Seattle grunge era big names like Nirvana, Stone Temple Pilots, or Mudhoney. The Melvins is a commonly liked punk influence.” Harry and Kevin connect with The Dead Milkmen, early Sonic Youth, Guided By Voices, and others in the lo-fi category. Indeed, the sardonic word play of GBV and the satirical humor and vocal delivery of The Dead Milkmen comes through in Play Center lyrics and recordings.

What do others hear? “We get a wide variety of answers to that question: The New York Dolls, The Cars, The Dirtbombs, The Breeders, and more. I used to worry that meant we had little continuity and were all over the place. Although everybody says something different, at least they all say they like it and the variety is a good thing. I think that if you listen to our new record Moving On, you can hear bits of all of those styles.” Kevin wrote all the songs on Moving On, but “now the four of us are writing together for an EP that should come out in 2019 and you will detect even more of our individual personalities in those songs.”

I wanted a childlike wonder and joy in creating music. I wanted it to be fun, and to be something we cannot wait to do.

Moving On’s nine songs were released to all major streaming sites in the first week of September. Physical CDs just arrived this week and will be available for sale. The band also plans to release a special edition of the album later in the year. The disc includes two songs that had been previously released as singles: “So Into You” and “Getting Up And Laying Down.” “We put these out first to grab attention because we thought they were broadly appealing, they have a pop sensibility to them that even makes them danceable, and they have rather family friendly lyrics for all to enjoy, which is not always the case in some punk music!” Kevin laughs. 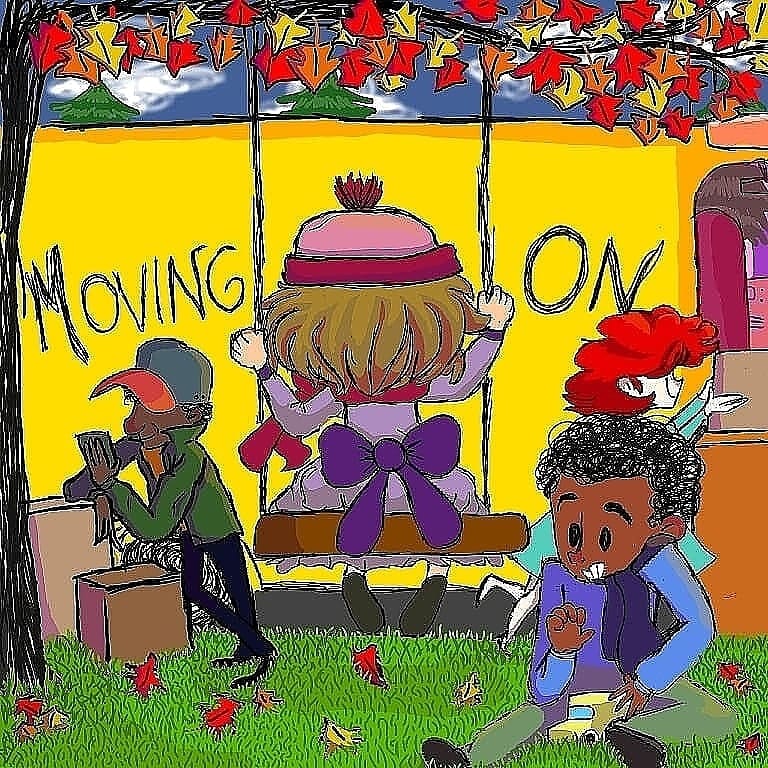 Now that the record is out, Play Center is playing all the shows they can. “It is a challenge as a new band, to book shows and so we have reached out to several other area bands to put together band lineups that we can offer up to talent booking agents for venues. We will play just about anywhere in the continental US if the arrangement makes financial sense. We are all about gigging as much as we can.”

Kevin continues, “We have a handful of gigs booked through the end of the year and would like to slot in some more. It would be great to get to a point where we hit it off with an audience and a club so well that we can basically “own” a night at that club. We are also looking at playing across the Southeast in places like Birmingham, Chattanooga, and Knoxville.”

So, what is next for these musical playmates? They are writing together for that 2019 album and trying out some interesting covers. Kevin says, “I think it is always great if you can take a favorite song and make it your own.” In short, Kevin, Andy, Harry, and Nick are having that joyful and fun experience with Play Center that Kevin first envisioned when he christened this band idea. “This is the most fun I have ever had playing in a band.” Go check out Play Center’s music and see them play live to catch some of that infectious fun.