Industry Off The Vine, Music Industry 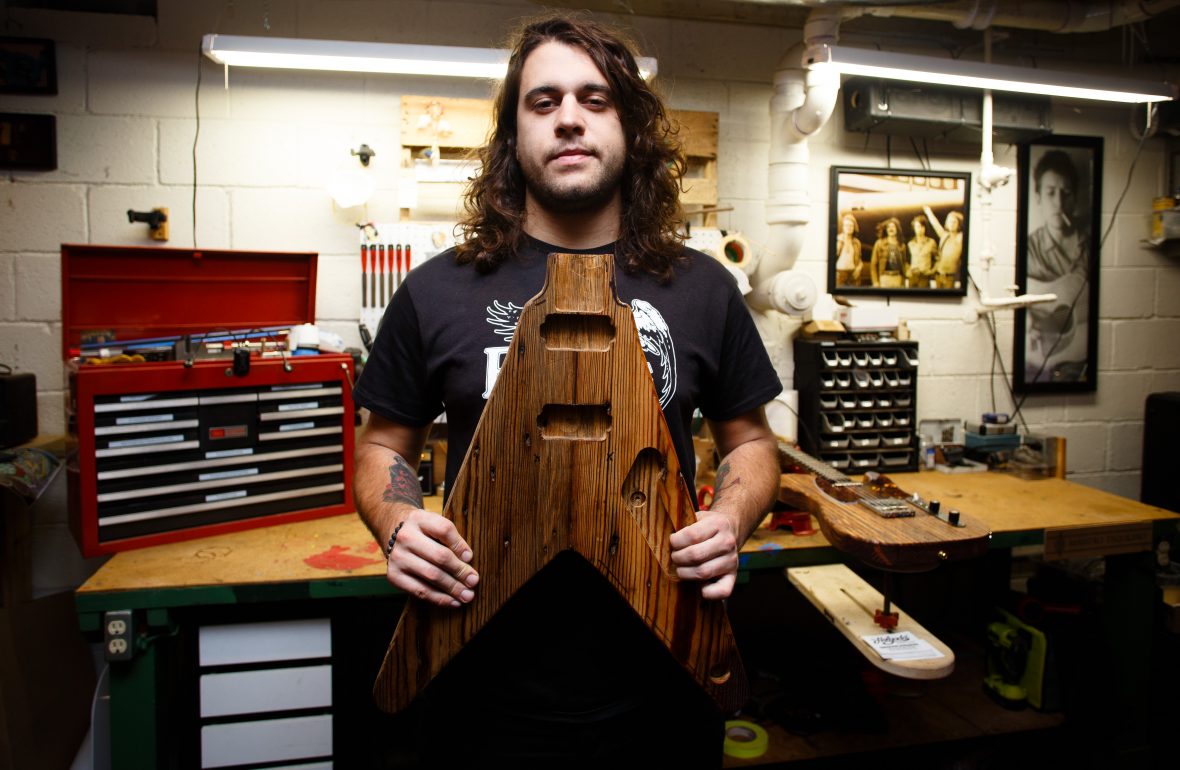 Tomás Holgado has a vision and he is not standing still. His high energy and passionate personality create a unique drive to do more and be more. His vision and inner drive have shaped his luthier business, Holgado Guitar Works, creating a new standard for timely, personal, interactive, reasonable servicing and building of guitars for players who cherish and depend upon their instruments.

His love affair with the guitar began when less than ten years old as he used his dad’s nylon string acoustic guitar to play along with AC/DC on his boom box. At thirteen, he played his first professional gig in his older brother’s band at the Masquerade, where as an unexpected underage guitarist he had to be escorted on and off stage. He played and recorded original music throughout high school and college. The lure of music called him and he set his sights on making it somehow in music.

While he worked on his own original music, he landed a job at Avatar Productions managing backline equipment at concerts and festivals, his strong knowledge of sound gear giving him confidence and quick success. He also got to watch and learn from the guitar techs touring with the bands he supported, and he saw he could stay connected to his passion for music in other professional capacities. 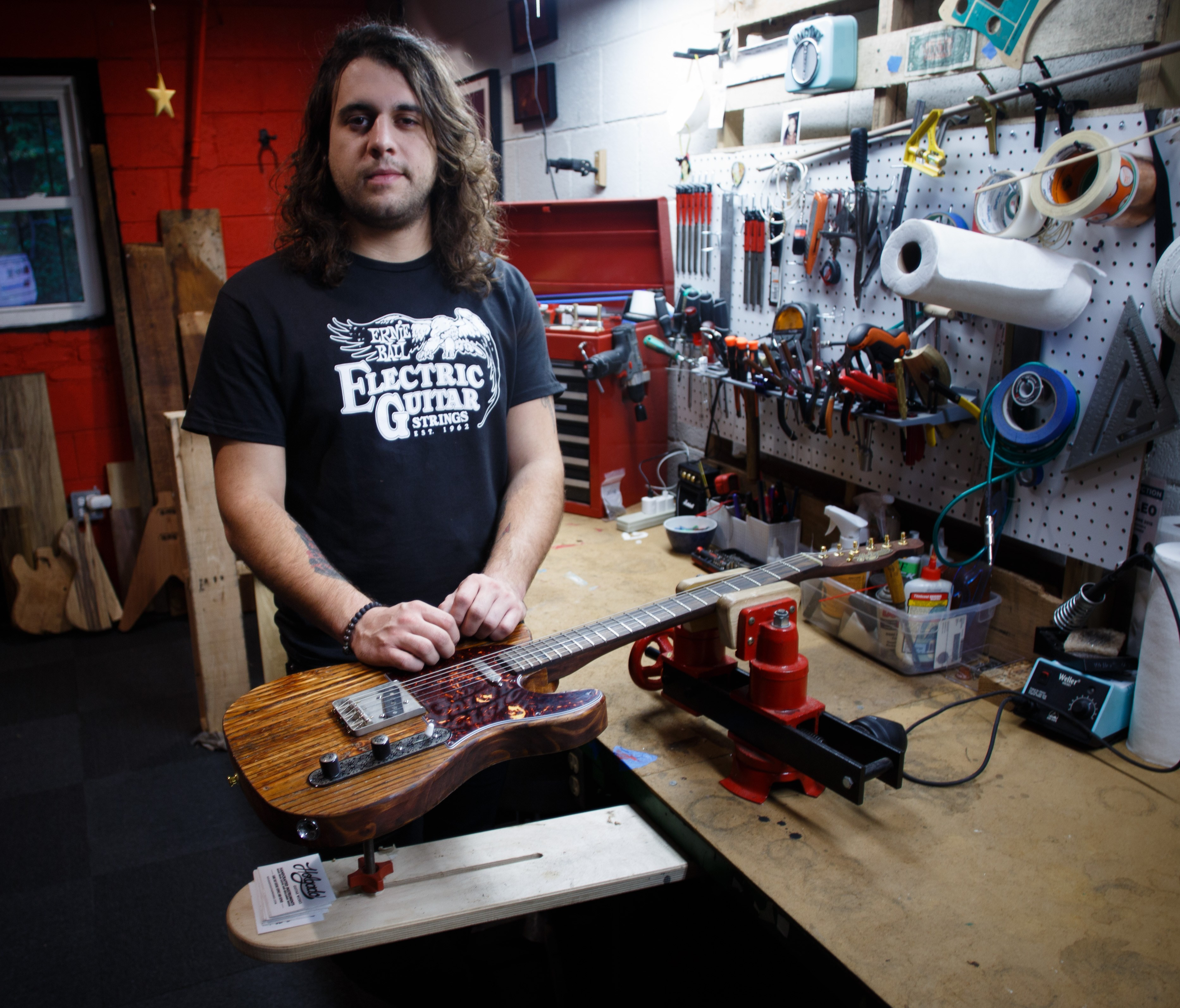 Tomás in his workshop.

A Google search led him to an intensive course in guitar building and repair, and Tomás began immersing himself to become a luthier, work he learned he truly loved and for which he had a natural knack. For a year after graduating from the program, he would drive into the city, pick up guitars from customers referred through his network, work on the guitars until early morning, and deliver them the next day after he finished working his day job. He subsequently found a position with an area guitar repair shop and while it was steady income, it was there that he began to develop his vision for disrupting the traditional luthier business. In the traditional model, Tomás says “Customers had to drop off their guitars and we were not returning them for as long as two weeks or more. That is a long time to go without an instrument. I realized that what mattered to me was taking care of musicians who work with their instruments and for whom their instruments are part of their lives and livelihoods, not only the collector fan. I want to take care of students learning, people who play at home – but people who really play and for whom I can make a difference. I saw that the traditional business model was dismissing some of these very customers, and at that point this passion was starting to feel like work and I was again feeling trapped.” He wanted to be a luthier, but he wanted to do things differently.

Knowing he needed to go out on his own, he cashed in his savings, bought tools, rented a house in Decatur and set up shop. Leveraging his network of musician friends and social media he began to find clients. He decided to turn the traditional luthier operating model on its head, by providing same-day guitar maintenance and repair services (as much as possible), and taking appointments – both of which he had never seen done before. “I take appointments because I do not want to make a client wait were I to be with another client. I want to give a client 100% of my focus. We will look over the guitar together and discuss options.” In Tomás’ shop if the required service is basic enough, clients are invited to hang out while he works on their instrument and play some of the guitars, basses, drums, and amps set up just for client use. “My clients were not used to this commitment to same-day service…and they really liked it.”

Using appointments to structure his time has allowed him to also focus on custom guitar building, a side of his business he wants to grow. He has his own aesthetic direction for his instruments. 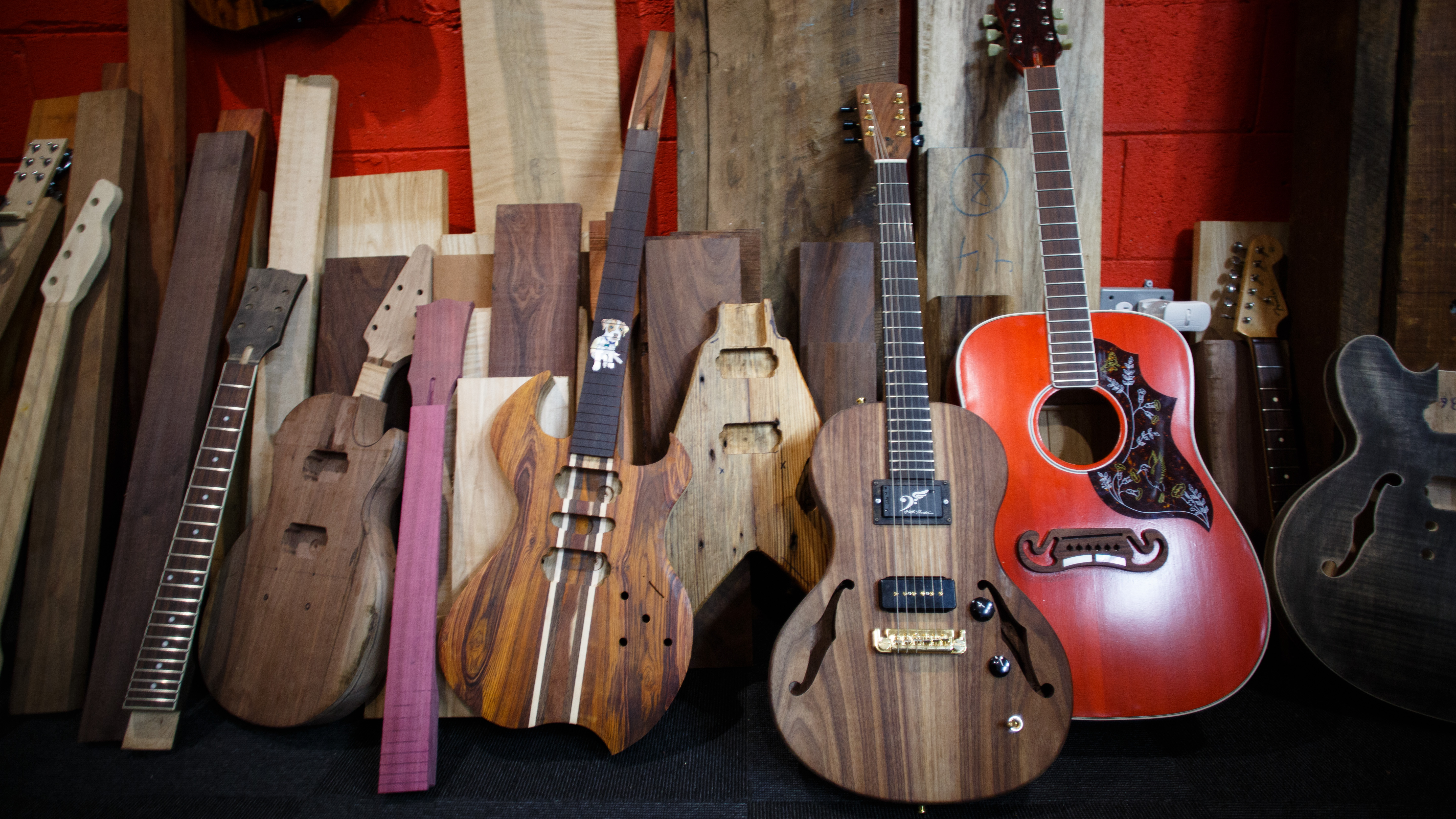 A sample of some builds in progress. Note the dog inlay on the fingerboard.

“I learned not to try to reinvent the guitar. The classics are classics for a reason, but there is certainly room for custom appointments. What I like to do is show off the wood, highlighting the figuring in walnut or maple in reinterpreting the classic models. I am not in the business of making gold tops or bright sunburst guitars. I also believe that natural wood better breathes and resonates. Otherwise you are not playing wood, but just playing the pickups.”

Just as he welcomes guitar repair clients, Tomás invites custom build clients to join him in the shop, grab a drink, play the guitars and amps, and be part of the process. “One reason is that I want to create an inviting experience, and I want to develop long-term relationships with clients. Also, if the client is part of the build process, the result is a ‘forever guitar’ because the client picked the wood slab, the neck dimensions, the top of the line parts – everything she or he wanted.”

Because of his love of the beauty of the wood, Tomás is now building a series of handmade guitars from what he calls “legendary lumber.” In this case, it is wood from the original Masquerade club, where Tomás played his first gig. “Much of the wood is 110-plus year-old cedar and pine, and not only is it beautiful, but the wood has dried naturally in ideal conditions – not to mention that it reverberates with Atlanta music history.” Tomás is taking advance orders on these guitars now. He has sourced additional historic wood, some dating to the 1800’s, from former restaurants, inns, and buildings in places around the region.

Tomás sees his way of doing things catching on. “It can be difficult to find luthiers. Sometimes the old school luthier path is more rooted in wood working than playing. I am a player. I also have a touring tech guy background, yet I learned my craft from really talented and experienced builders, so I have a foot in the commitment to the old trade, too.”

Tomás says, “I am a fierce competitor and I do believe in the phrase ‘there is the best and then there is the rest.’ But I believe that I am promoting a different service. I am offering a welcoming, inviting, client-focused ‘educational experience’ when it comes to guitar repair and upgrading. I want to create top of the line hand-built instruments with exotic woods and top of the line parts for a reasonable price.”

Tomás’ drive and contagious energy has him already envisioning the future of Holgado Guitar Works. “I want to build cool guitars and get them in the hands of globally big bands, and keep on doing it. What I would love to create is a big warehouse-sized place. We would have a build section, and a repair section each with multiple stations of other luthiers. There would be a record store featuring Atlanta artists. We could have coffee shop or even a bar – luthier baristas or luthier bartenders! The idea is to have a place you want to hang out while watching guitars being worked on and built.” 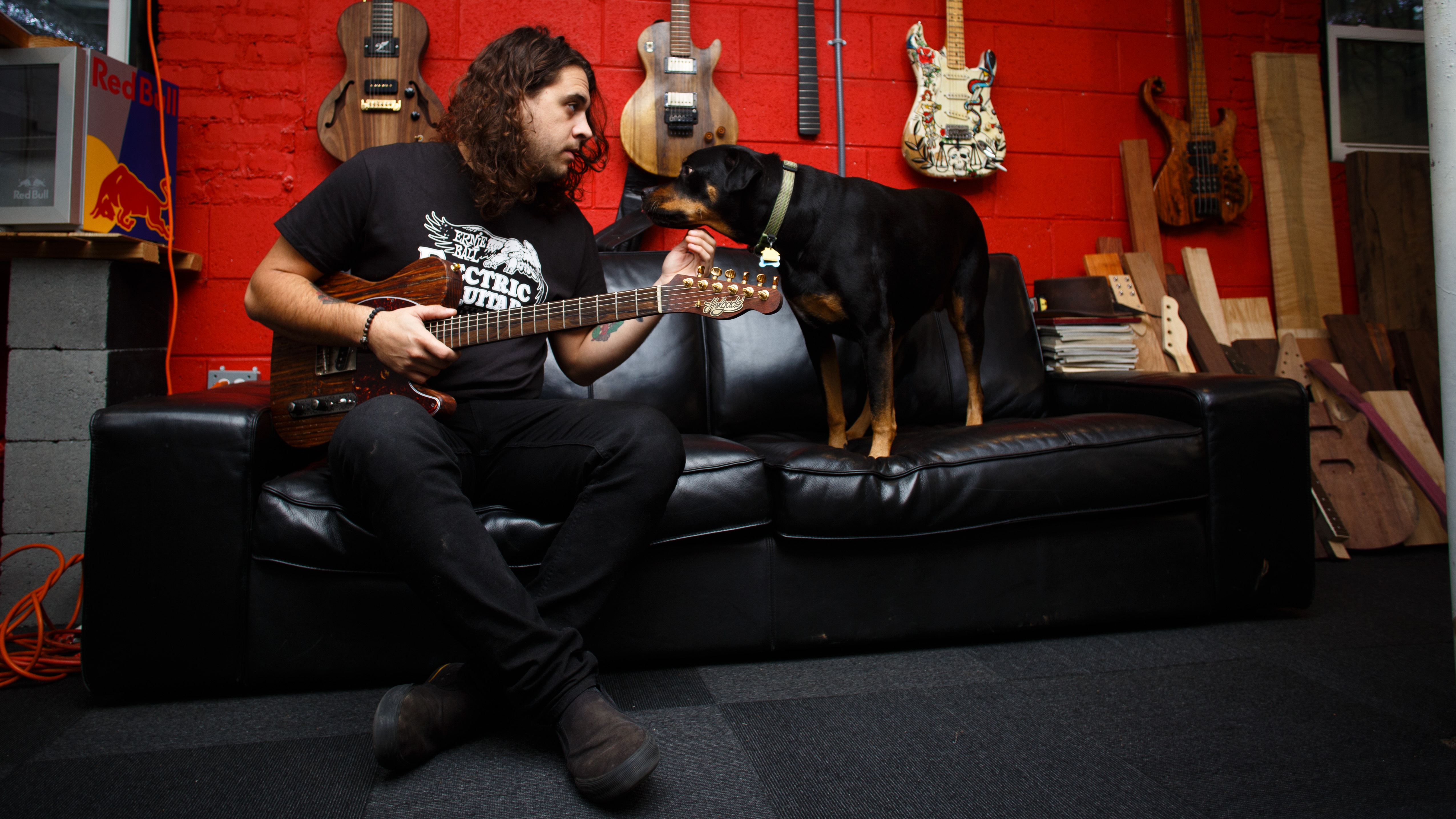 Holgado Guitar Works has a friendly vibe and is a comfortable place to hang out while waiting for your guitar. Expect to see puppy Georgia while you are there.

While Tomás is not yet slinging vanilla lattes while performing a fret dress on a vintage Strat or mixing an Old Fashioned while straightening the warped neck of an acoustic guitar, after exploring differing paths in music, Tomás is happy where those paths have taken him today. “I finally feel I am at a point where this is me. I am working with people who love guitars just like I do. I believe I am offering a different product that players value. Touring with a band can come and go. Hit singles can come and go. But my hands and what I can create are with me always. It feels great. “