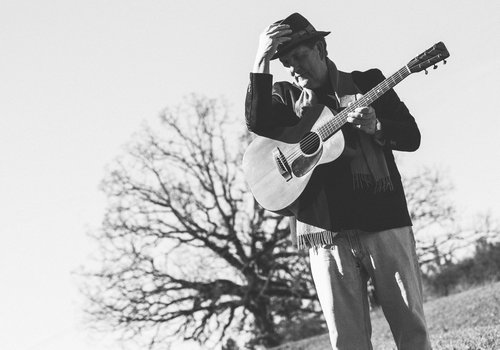 DISCLAIMER: At AMGV we have not done any true record reviews. Good, objective record reviewing is a rare skill, not unlike that of a spirits reviewer who can tell me there are hints of crème brulee, bacon bits, and peach cobbler with a peppercorn finish when all I taste is bourbon that I either like or do not like so much.

However, we like to make readers aware of new art from the fine folks we have featured in the Grapevine, and if we cannot offer up donnish descriptors or grandiose expositions, we can at least give you some of our impressions.

In August, we profiled Papa Jack Couch as he was preparing a listening party for his new album Witness Tree (click here for story). The album is out now, and the record release party is October 12 at 8:30 P.M. at The Alamo, 19 W Court Square, in Newnan.

Papa Jack Couch is a long-time songwriter, stretching back to his college days. His previous album, Meriwether, featured songs written from the 1980s through the early 2000s. The thirteen songs on Witness Tree are newer songs written after that period. While Jack’s early love of music was fueled by the popular folk music boom of his youth, Meriwether was a catchy chocolate box of various stylistic flavors inside and outside that folk core. With Witness Tree, he again takes the listener on a rollicking ride to even more musical destinations, showing he indeed is a Jack-of-all-trades.

The record kicks off with “Spirited Away” with a jangly 12-string guitar intro reminiscent of The Byrds or their acolytes like Petty, Buck, or The Wilburys. It is a punchy opening that leaves one wondering what might follow next. On tracks like “Heart Song”, with funky guitar and organ parts and background vocals like those of The Sweet Inspirations, Jack takes the listener to the blues and soul of Memphis, including a soulful sax solo.

From there he brings us to church in the delta with “Jesus Is The Truth”. Indeed, there is a spiritual undercurrent in many of the songs, but they never get preachy, instead reminding us to soak up the wonders of the world as in “Spirited Away” or look past the troubles of tonight and forward to the blessings of tomorrow morning in “Heart Song” or “Sights On Him.” If a prime-time Johnny Cash once told young Jack that he had some good songs, it is not surprising Jack can conjure up sincere country songs like “Heartshine” or “Smokerise Sundown.” This is not formulaic modern bro-country but Music Row at its peak, with the latter song’s lyrics of “unwinding the blacktop” backed up with country boogie-woogie piano and twangy guitars.

Jack shows us a side of folk in “Pittsburgh”, its stark, cautionary message of today’s divisions channeling folk’s politicized tradition, flavored with a shake of Cajun-spiced accordion. Then Jack sings over a snappy, jazzy beat in “High Line Woman” that could be from the catalogue of Lyle Lovett & His Large Band.

For all of the fun of following Jack through his varied music inspirations, he also gives us some mellow and poignant performances where the key ingredient is his sincere delivery of poetic details. He sings of the “fleeting carousel” in “Twilight Memories” or how he and a love now gone would share the little details of their days in “Hazel Eyes”.  No adornment is needed beyond his melodic guitar accompaniment to his sweet and tender vocals. While their timbre communicates real longing and melancholy, it also gives warmth, and the words are also an ode to extraordinary togetherness that only true love and wisdom can know and appreciate.

The record winds up with “All Of The Above” which with its barrelhouse piano forward melody and lyric snippet “some say all you need is love” makes one think it could fit alongside a White Album-era McCartney composition.

Through the variety on the record, Papa Jack reveals why he is the real deal. He skillfully navigates through all of the stylistic differences, letting us hear in all of them his very real joy in sharing his music. This, as much as the addictive melodies and lyricism, is reason to listen and repeat.